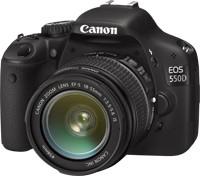 The Canon 550D dSLR was announced by Canon in February 2010 for release in April 2010. The camera boasts several significant improvements over the Canon 500D including better HD video, 18 megapixel images, and a much improved metering system that was previously only available in the much higher priced Canon 7D dSLR.

The image quality of the new 550D Canon improves significantly on the previous models in the line jumping from 12MP and 15MP to 18MP. Added to this is the inclusion of the latest DIGIC 4 image processor technology, the 500D used the DIGIC 3 technology, and you'll find that the photographs captured will be of much better quality.

The Canon 550D includes the new iFCL metering system which includes many advances in image capturing technology. For example the new system uses a 63 zone sensor which analyses focus, color and luminance simultaneously to provide accurate and consistant metering. This was previously only available on the much more expensive semi-pro Canon 7D.

The HD video introduced to the range with the Canon 500D has grown up and now boasts many improvements shooting at 1080p or 720p. The camera gives you full control over the frame rate so you can even capture fast moving images by manually adjusting the settings.

The 550D offers a standard ISO range up to 6400 which can be expanded to 12800 for situations where the use of a flash is either undesirable or not allowed. The increased range allows low-light photography and the DIGIC 4 image processor ensures graininess is kept to a minimum.

The new movie crop function allows you to shoot movies at standard definition at up to 7x effective zoom. This is great for situations where you don't have time or don't want to change the lens. The function achieves this result by using only the center area of the sensor.

Improvements in the LCD Screen

Canon have also improved the LCD screen, it's still a great 3" but now improves the resolution and increases clarity for the all important checks on the images as you shoot them.

Improving on a Strong Line

The Canon 550D is fully compatible with EF and EF-S lenses as well as EX-Speedlite accessories so none of your existing lenses will suddenly become unusable. Add to this the improvements in control functions and it all starts to make the idea of upgrading to the Canon 550D an irresistable choice.